From the moment dedicated driver Toledo pulls into the account parking lot, he is smiling and waving at everyone he sees. Within minutes, he has greeted the entire office with an energetic “Good morning!” and a clap on the back. The account is bustling with drivers picking up their loads for the day, and Toledo is busy giving advice on delivery sites and spreading his motivational words of wisdom.

“I always want to be in an environment where I want to promote positive thinking,” Toledo explains. “I built so much of a positive barrier around me, I just want to share it with others.  It’s coming out of my pores!”

Although it is hard to imagine Toledo without a beaming smile on his face, he says that he was not always a positive person. “I was in the dark many times…a lot of things happened in my life that I am not proud of,” Toledo explains, saying it took him hitting rock bottom in his personal life several years ago to change his mindset. “I said, ‘ok there’s got to be more than just being pessimistic all the time’… and I started reinvesting my mind into positive thinking.”

Toledo’s intentional positivity does not end when he leaves the account but follows him as he drives from Connecticut into Manhattan. He gets visibly excited every time he passes another J.B. Hunt driver on the road. “It tickles my brain when I see…fellow drivers on the road,” he says, rolling down his window to wave at a DCS driver pulling up beside him in traffic. “Look at him! He’s smiling! He’s out there doing his thing just like me! Its just fun!” His account managers refer to him as a Super Trainer, a job title Toledo wears with great honor. “Meeting new colleagues…and training them, it’s a wonderful thing.” 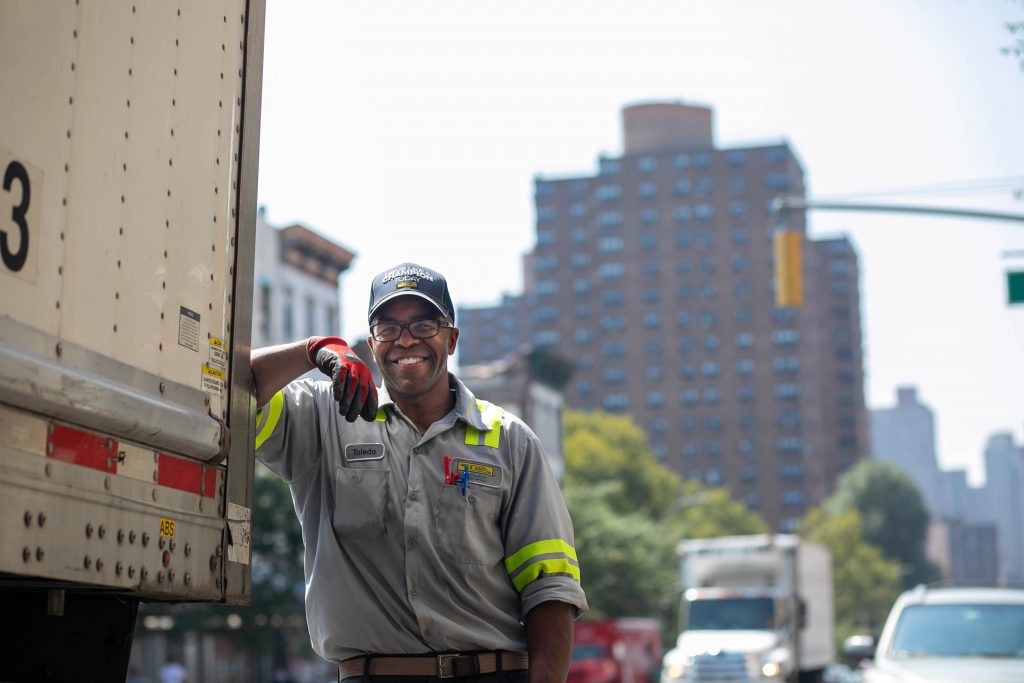 Beyond sharing his knowledge of driving in New York City, Toledo strives to be a positive influence in his coworkers’ lives by listening and encouraging. “When I talk to drivers and they are feeling down, I try my best to put a smile on their face,” Toledo states. After recently speaking with a driver about some personal issues he was facing in his life, Toledo was taken aback when the driver approached him a few days later to thank him for the encouragement because it had made an impact on his life. “It gives me goose pimples…because I was able to help him out in some way.”

Parking on a busy Manhattan street, Toledo turns on his hazards and walks a block and a half to the store he is delivering to, pointing out his favorite deli along the way. The store is on a small one-way street, requiring him to make a sidewalk delivery using his E-Jack to unload the pallets. Store employees use a forklift to transport the pallets back to the store. Toledo greets each of the employees enthusiastically, happily chatting with them while they unload the truck.

“I don’t look at it like getting behind a truck and going to [a] delivery,” Toledo says, explaining his philosophy on customer service. Making deliveries to small grocery stores in New York City multiple times a week, Toledo doesn’t let the frustration of traffic or tight delivery sites affect his attitude but focuses on the customers counting on him to deliver their baby’s food or bottled water during the hot summer months. “I look at it like something is on that truck that a customer goes into a store and needs all the time,” he says. “They’re waiting on the truck to get there to put it on the shelves…everyone has to eat.”

During his delivery, a man approaches Toledo on street and asks him for $5. When most people would shrug off the stranger, Toledo takes a moment to speak with him and agrees to help him out if they do a push up together. “I believe in giving someone something of value no matter how big or how small it is,” Toledo says, explaining the interaction. “Whether it be as small as giving someone a dollar when I’m at a store because they’re asking for a dollar, or something as big as helping my kids change their life.”

Meeting at a local restaurant for an early dinner, Toledo and his three children gather around the table discussing their favorite topic, superheroes. Greatly influenced by comics while growing up, Toledo has passed on his love of superheroes to his children, and they have a tradition of seeing every new movie together. Still in high school, Toledo’s son Kyle is appreciative of this bond they have together.

“I want to promote a different mindset for the kids so they can learn that it’s alright to be positive, because we are surrounded by negativity every day,” Toledo states. His kids are his greatest motivation in his journey towards happiness and positive thinking. Referring to themselves as a crew, Toledo and his children have a running group text where they encourage each other daily. 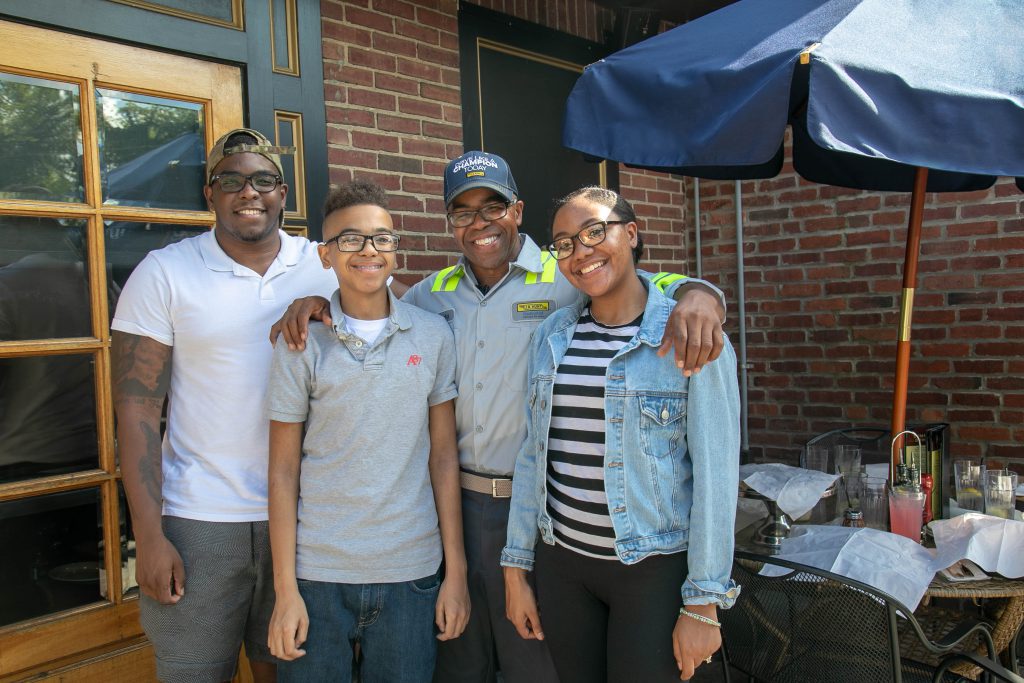 “He…changes my perspective sometimes when I like think about things,” Toledo’s daughter, Tiana, says of him. Attending culinary school in Rhode Island, she drove two hours to Connecticut to eat with her family. Going to school full time and working, Tiana explains that when she gets tired and wants to give up, she turns to her father for encouragement to keep going. His other son TJ, a military police officer, says his father inspires him every day to work harder. “I am just trying to be like him,” TJ explains. “It’s just always battling to pretty much be the best that you can be.”

“Things have happened in the last several years that are amazing,” Toledo says, explaining how his life has changed. During his career with J.B. Hunt, Toledo has won Driver of the Month four times, Regional Driver of the Month twice and was named the Northeast Dedicated Driver of the Year in 2018. “I just couldn’t believe it…I didn’t realize I made such an impact,” Toledo says of his emotional acceptance of the award.

When suggested that he is an inspiration to other drivers, Toledo admits that he is speechless. “That’s the whole goal, right? You want to be able to be inspiring, so you can help others,” he says smiling. “At the end of the day, I want be against the grain. I want to show everybody that there’s more to it than just being pessimistic.”

Want to join our team of great company drivers like Toledo?  Call 1-877-791-9458 to speak with a recruiter or fill out pre-qual form and we’ll contact you!