An estimated 8.5 million people live within the New York City limits, and over 600,000 people from the surrounding areas commute into the city for work. Home to the George Washington Bridge and the Lincoln Tunnel, the busiest bridge and tunnel in the world, New York City is almost exclusively accessible by over or under water infrastructures. The streets are congested with bumper to bumper traffic at all hours of the day. The rules of the road are treated as mere guidelines. Parked cars line every street, turning what should be two lanes into one and a half and city buses barrel through haphazardly. There are stoplights at the corner of almost every block and crowds of pedestrians swarm the sidewalks, stepping into oncoming traffic as they cross the road. 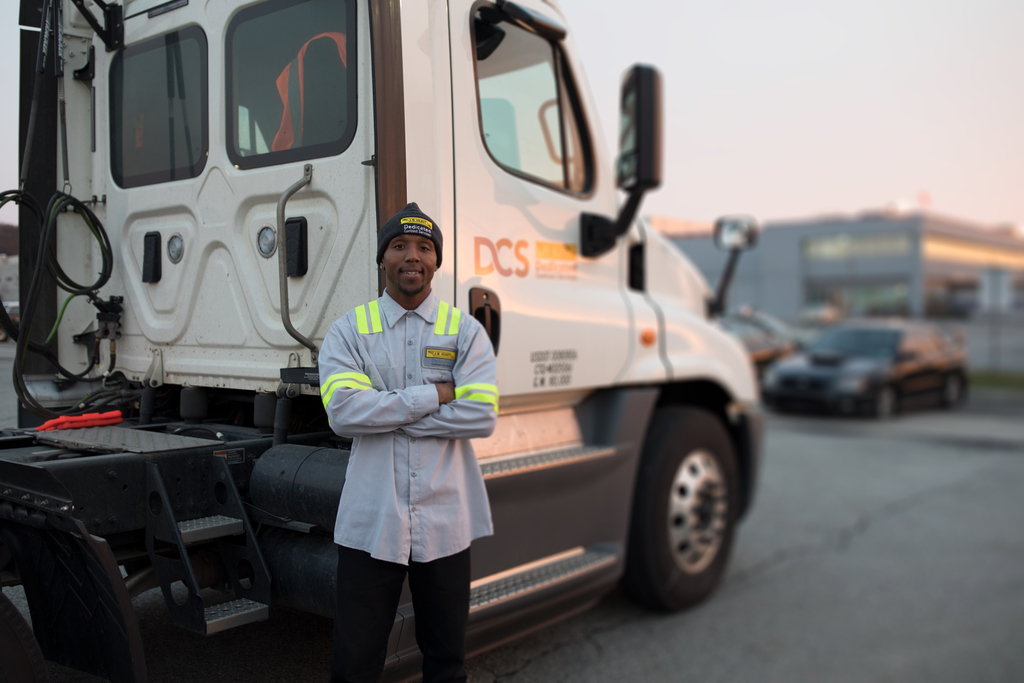 The thought of driving just a 2-axle vehicle in New York City is enough to induce panic in most, but local J.B. Hunt driver, Owen, drives a tractor-trailer with ease through the city. Inching forward in rush hour traffic, Owen doesn’t even flinch when a yellow taxi suddenly cuts in front of him, narrowly missing his truck by inches. “I learned not to have road rage,” Owen says, shrugging as the taxi driver blares his horn. Driving five miles can take over an hour and the city is abundant with one-way streets and avenues blocked with double parked cars. One wrong turn can easily add an extra ten minutes of traffic and stress to your drive, but Owen has spent his four years with J.B. Hunt memorizing the quickest routes in and out of the city. “Before you commit to a full turn, look down the street,” Owen says, keeping an eye out for road blocks. He goes so far as to park his truck and walk down the block to ensure he will be able to make his next turn. If there is a delivery site he is unfamiliar with, Owen doesn’t hesitate to ask another driver for advice. “The best thing to do is always call another driver that’s been going to the city or been going to where you are going.”

Owen was only a year into his driving career with another company, when J.B. Hunt acquired his account. Seeing it as an opportunity to start fresh, Owen was excited to join the J.B. Hunt DCS team in Chester, NY. “A full year into his employment with J.B. Hunt, Owen quickly found his way to the top of our driving fleet,” Regional Operations Manager, Kenny Thomas wrote. In addition to taking on some of the accounts most difficult deliveries, Owen was trained to also work in the yard, which he saw as an opportunity to perfect his backing up skills. “Instead of one or two times a day…I was doing it for ten hours straight – just straight backing up. So now I got my backing up skills even greater than most people,” Owen says. “I can get in and out of tight places, like the city, with ease now.”

Always looking for an opportunity to learn more, Owen volunteered to join a pioneer group of drivers to support a sister account in Hatfield, MA. “That [account] delivers to privately owned grocery stores positioned in the downtown NYC Borough areas,” Kenny explains. Deliveries for the Hatfield account often force drivers to double park and off load the pallets onto the crowded sidewalks of Manhattan. “With his fellow drivers and his expertise, J.B. Hunt opened up an extremely important support link that the Hatfield [account] needed. This support link is still used today.”

Just shy of turning 30 years old, Owen has been driving with J.B. Hunt for four years and has been a Driver Trainer for three. “He is my go to guy when I need anything” Katie Franck, Owen’s Account Manager, says. “He can go to every store. You know, the city is where people are scared to go. Owen willingly goes there every single day for us.” In addition to being reliable on the road, Owen is always happy to help his fellow drivers. “A driver needed me the other day. A bridge was shut down. He couldn’t figure out how to get around the bridge to get to Brooklyn,” Owen says. “So, my account manager, she called me and gave me the guys number and asked if I could tell him how to get around the bridge to get to the store. That was one of my days off. I stopped what I was doing and called.”

Whether it is with his fellow drivers, his managers or with the customers he is delivering to, Owen tries to bring positivity to each of his interactions. “Owen’s always smiling…he’s got a positive personality,” DCS driver Joe W. says. Whether Owen is giving him advice on an unfamiliar delivery site, or simply making him laugh, Joe says it is a good interaction to have before heading out on the road. “If we had more people like him, I think this place would be a lot better.” If one of the managers is having a bad day, Katie says Owen checks to see if they are okay and tries to make them laugh. “He is always worried about everybody at the account.” She also says that Owen is always helpful and positive with his customer interactions. “When he goes to the stores, he knows how to talk to the managers there. He is more than willing to help the stores, as well.”

Owen enjoys the relationships he has built with his team, and is willing to go above and beyond to help them out, but his ambition is truly fueled by the desire to provide for his family. “I’m just motivated to work,” Owen says. “To be able to just take care of my two kids and give them everything that I didn’t have growing up as a kid…that’s what motivates me to work hard.” With two sons under the age of ten, Owen prides himself on being able to make enough money to give them everything they need. “My younger son he wants to do karate…and I haven’t paid for that yet,” Owen says. “This week I’ll work an extra day…so now I can afford to pay for that.”

“There is always work here if you want to make the money,” Owen says. The ability to work an extra day to make more money is one of his favorite things about driving for J.B. Hunt. He also appreciates the flexibility and home time his DCS account provides him. “Being able to be home every night is a good thing, you know. Help my kids with their homework. Pick them up from daycare on some occasions.” On his days off, Owen spends as much time as possible with his sons, enjoying their company. “We go to the movies and right now they are playing flag football, so we got to start practice for that.”

In addition to providing for his son’s, Owen is trying to save for his future. Constantly learning from others, Owen is inspired by a fellow driver on his account who is in his 70’s and works solely because he wants to. “He is retired. He is just working because he wants to. He is traveling because he wants to,” Owen says. “So, he motivates me to have my plan and put a lot of money in my 401(k), which J.B. Hunt matches….so when I am 70, if I choose to work, I can work, not because I have to.”

Katie says Owen’s success at such a young age speaks volumes to the incoming drivers that he trains. “He might not have 20 years’ experience, but the experience he has…he is able to utilize it out there when he is driving.”

“Just follow the Smith System as much as possible, because people will cut you off and you just got to deal with it,” Owen says of driving in the city. In addition to patience and confidence, the advice he gives the drivers he is training is to take their time and to remember who they are working for. “Which for me,” Owen says, “I am working for my kids, to make sure they have everything.” It’s his love for them that drives him to be successful. 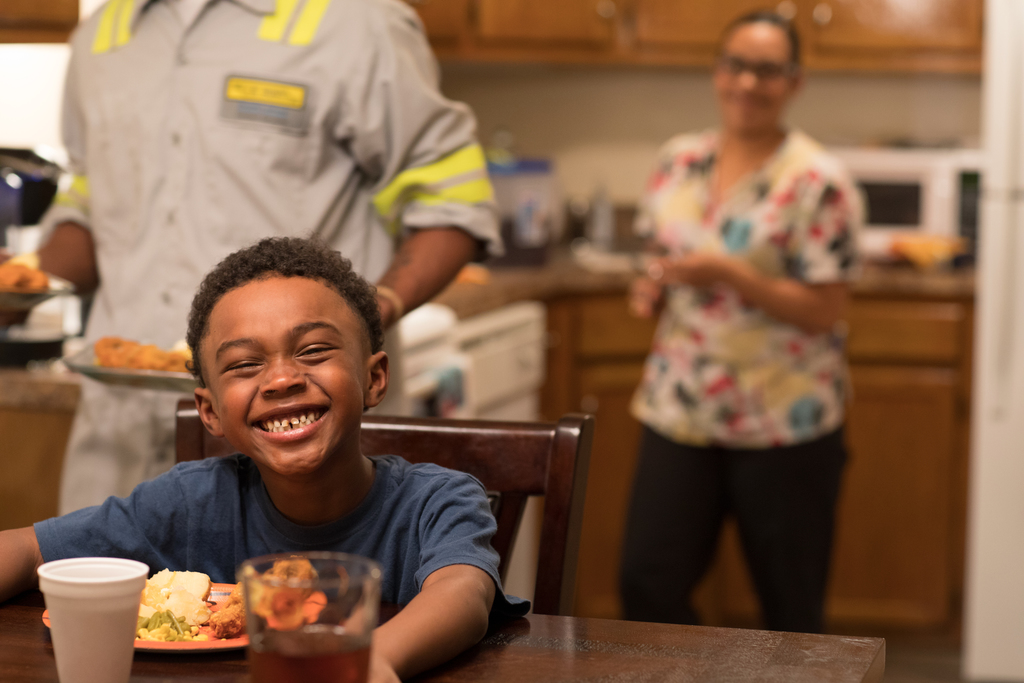 Press play to learn more about Owen and how he excels at his local trucking job:

Interested in working with a carrier that offers a variety of driving opportunities? Call 1-877-791-9458 to discuss over the road, regional and local truck driving jobs or contract opportunities with J.B. Hunt or fill out a short form online.