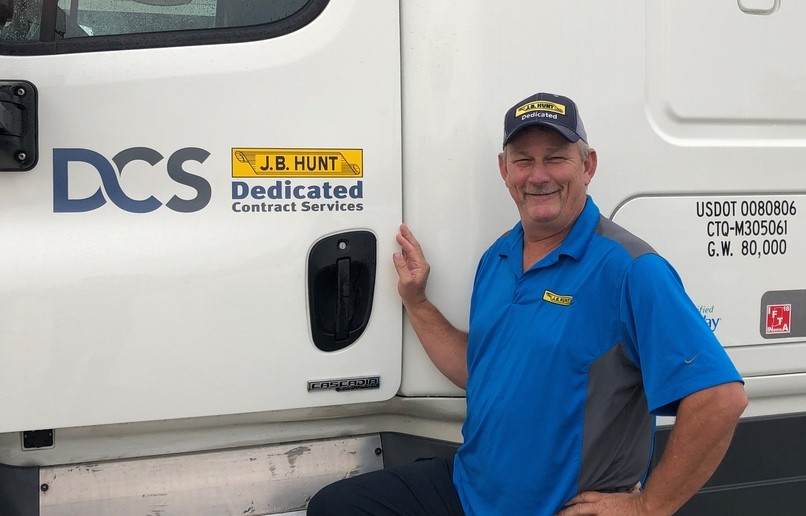 With years of truck driving experience and military service, J.B. Hunt driver Darrell knew he had to react quickly to help those inside a crushed vehicle flipped upside down on an Arizona highway.

Darrell first saw the red PT Cruiser pass him along the left and noticed an elderly couple chatting in the front seat. They eventually merged in front of him and then into the right lane beside him. Soon after, he saw the same vehicle pushed out in front of him with its back end now smashed in, losing control and flipping colors of red across the highway. It had been rear-ended by a bus.

As glass shattered, debris flew, and the couple was tossed around inside the car, it finally stopped in the ditch of the grassy median, preventing it from entering the other side of the highway.

Darrell pulled over his truck and immediately started making his way to the flipped vehicle.

“I wasn’t able to see inside the car. I was trying to figure out how to get into the car because the car doors were locked, and the car was upside down. There was no movement in there whatsoever,” Darrell explained. “You couldn’t see in there because of the simple fact, the airbags, the side curtain, you couldn’t see. So, I was yelling and asking if anyone could hear me in there and I could see a hand on the passenger side raise up that curtain and knock on the window.”

That hand belonged to the passenger, a man named David. “I told David, alright guys, I’m gonna get you out of there.”

Due to the median’s soft ground, the dirt allowed Darrell to pull the driver door open a mere six inches. As it cracked open, he met the driver, a woman named Meredith. “Meredith was in there hanging upside down in her seat. I looked in there and said, ‘Hey babe, how are you doing?’ and she looked at me and said, ‘Aw. I’m doing just fine. I just need to get out of here,’” he said.

Darrell was still unable to move the door any further on his own. As he watched traffic blow by, another man pulled over to help. The two were able to rip open the car door, use the man’s knife to cut the seatbelt and free Meredith. They moved her a safe distance from the damaged vehicle.

Gasoline was leaking around the car, so Darrell moved quickly to get David out of the passenger side.

“I climbed back inside the car and David was laying on his back in there. I told David, ‘Alright fella. How do you feel?’ He told me that he was fine. I said, ‘Alright, we are gonna get you out of here.’”

Darrell instructed David to turn his legs toward the car door. As he began to roll over, he yelled in pain. His ribs were hurting. “I told him to breathe deep a couple of times because I wanted to make sure that he didn’t puncture any lungs,” Darrell said. “I told him, ‘Good news dude. You don’t have a punctured lung, you’re just bruised up. Let’s get you out of here.’”

The two men got David out of the car and to a safe destination beside Meredith. Two of their dogs were also released from the vehicle and with the couple as well. Meredith frantically told Darrell that there were three dogs in their vehicle and only two were beside them.

Darrell again returned to the wrecked vehicle. “I climbed back in there and moved all this stuff out of the way and I pulled this crate out and there was a little shih tzu inside there. I pulled it out, carried it over to them and said, ‘I got good news! The dog is still alive!’” he said. “And I opened up the door and you know that little dog jumped out there and bit my finger!”

The highway patrol, ambulance and the fire trucks arrived on the scene and Darrell went over to the couple and gave Meredith a hug and shook David’s hand. “I told them, ‘You guys, I’m sorry this happened to you, but I’ve got to get on down the road,’” he said. “Meredith looked at me and said, ‘Young man. Be careful out there on the highway.’ And I just giggled to myself as I walked away.”

And helping anyone in need is second nature for the J.B. Hunt truck driver. “I’m pretty much one of those guys that if I see somebody that needs help, I’m going to be there to help them no matter who they are – race, color, creed or what. I don’t care who they are. It’s a human being helping a human being,” he added. “That’s what society is about. I guess it’s what God would expect me to do and anybody else.”

Interested in driving with us and learning about J.B. Hunt jobs? Call 1-877-791-9458 to learn about our over the road, regional or local truck driving jobs or fill out our short form online, and we’ll contact you.