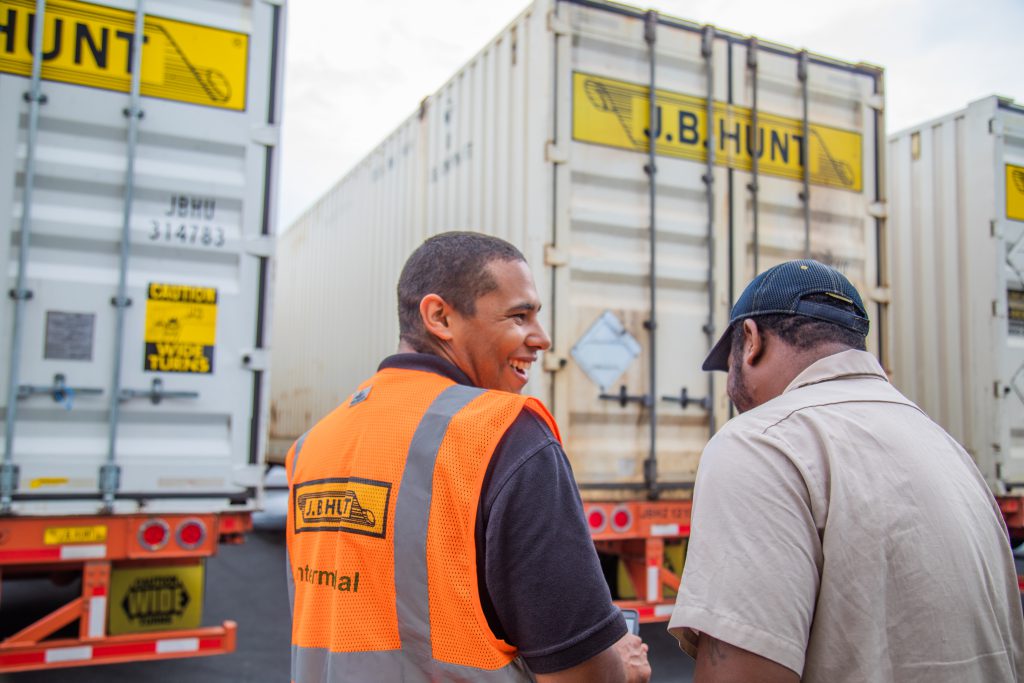 It’s no coincidence Robert ended up behind the wheel of a J.B. Hunt tractor-trailer. Robert’s dad was a J.B. Hunt driver for many years, and his mom worked at J.B. Hunt in driver recruiting.

Although the J.B. Hunt ties ran deep, Robert’s plan wasn’t always to follow in his family’s footsteps. However, after exploring other options, he realized that the road was where he was supposed to be. “What led me to trucking was I was going to college for I.T., and I wasn’t really happy with it,” Robert explained. “So, my dad drove a truck for 25 years and it’s something I’ve always been interested in.”

Robert was working on his CDL when he first heard about J.B. Hunt’s Intermodal division. “When I was in driving school, a recruiter from J.B. Hunt came into our school…and I really liked the intermodal position,” said Robert. “I liked the fact that I could be home every day and it was good money.”

Robert quickly proved himself to be a safe and knowledgeable driver, and management took notice. His concern for fellow drivers and his ability to help prepare them for the job made becoming a driver trainer a natural next step.

“Robert is a trainer because he gets along very well with people. He lives safety every second, every shift, every day,” said Frank, Area Risk Manager. “He takes a very tough job and does it exceptionally well.”

How does Robert train drivers while maintaining his exceptional standards? He credits his commitment to safety and a positive attitude. “The positivity helps me as a driver trainer because I try to create a stress-free environment when I train…first priority is always safety, and second priority is getting what I need to get done completed,” he explained.

Just as Robert took to driving and training, he quickly absorbs the technology J.B. Hunt provides and uses it to help him and his trainees get the most out of their workday.

“The technology J.B. Hunt incorporates makes my daily tasks easier and it makes my job better,” Robert noted. “With the Drive App, it makes the day easier because I have all my information right there on my phone and I can do my loaded and unloaded calls and do my arrivals and get all my messages.”

His managers, again, watched him take the reins on teaching other drivers the importance of integrating technology into their driving jobs. “With Rob, he was one of the first ones taught on [the Drive App] and it helps our operations run smoother and it’s a lot more efficient. As soon as you learn the Drive App, it’s like clockwork,” said Kodie, Robert’s Fleet Manager.

Robert has carried on his family’s and Mr. Hunt’s legacy through his hard work and commitment to be the best he can be.

“Robert is the spirit of J.B. Hunt and embodies a lot of what I think J.B. Hunt, the man, was and wanted to be,” said Frank. “Robert is always here. He’s always on time. He’s always in uniform. He’s always very happy and upbeat. He is a pleasure to be around. He’s a very, very hard worker and does very, very well.”

Whether Robert is training new drivers or incorporating new technology into his routine, he is up for whatever challenges the day brings and will do it with a smile.

Want to work with positive and safe drivers like Robert? Check out driving jobs near you, speak to a recruiter by calling 1-877-791-9458 or fill out this form and a recruiter will reach out to you directly.