It’s no secret that a father’s influence is powerful.  That influence leads some to follow in the same career path. For drivers Mandi, Kevin and Jason, stepping into a J.B. Hunt truck each morning is met with a sense of pride as they carry out the legacy their fathers left before them.

Many summers of dedicated driver Mandi’s childhood were spent with her dad learning the rules of the road from the cab – even attending J.B. Hunt picnics hosted by Mr. and Mrs. Hunt. During this time, she learned to drive stick shift but more memorably, she recalls a piece of advice that she continues to hold close. Her father told her, “You may be a red-headed little girl but don’t ever let that stop you. You can do anything.”

Eventually, Mandi realized that doing “anything” would mean she’d follow her father’s driving career. While working in the restaurant industry, she would see truck driving commercials and slowly those drew her in as she sought the sense of stability in a driving career. Mandi went to school knowing she wanted to work with J.B. Hunt as an employee driver, and after obtaining her license and experience, that’s exactly where she landed. Unlike her father who drove over the road, Mandi opted for a local spotter position to spend more time close to home. She says, “I tried over the road but really love what I do right now being home every day.” Her advice to others seeking a career in truck driving is, “Truly know what you want to do in your heart. Give it all you got because it’s not easy but it’s worth it.”

Intermodal driver Kevin shares his early memories of truck driving, “I was taught the old-fashioned way of truck driving. My first truck that I actually got in and drove was a 1969 International Transtar 2 cabover with a little 289 Cummins motor in it. Every time I did something wrong, I was basically smacked upside the back of the head from dad or grandpa saying, ‘hey don’t do that!’” 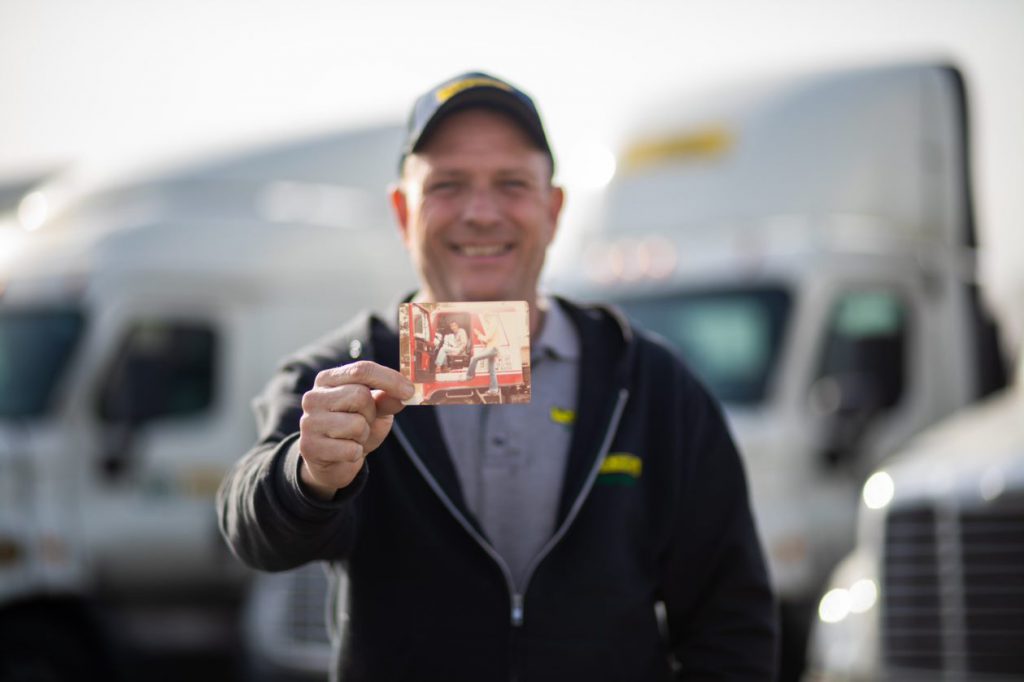 Now, as a lead driver trainer across the Seattle region and beyond, Kevin shares with trainees all that he’s learned about truck driving. “All I’m trying to do is do my best to pass on the knowledge that I’ve learned over my years since I’ve been in the trucking industry since I was five. You know the stuff that my father passed on to me and I’m trying to pass it on to them and all the stuff that I’ve learned, too, because it’s one thing about this industry – you never ever stop learning.”

Kevin finds many parallels between his father’s time on the road and his own. “With everything that I’ve learned about truck driving over the last 30 years, I can say I was influenced by my father who taught me everything that he knew after being a truck driver for 40-45 years with him, and that stuff still holds true to today’s truck driving. What I’ve learned from my family’s history in truck driving is the importance of road etiquette and customer service.” Ultimately, he says, “I probably wouldn’t be a truck driver today if it wasn’t for my father. He influenced me that much, teaching me the job and everything… I think my dad is the reason that I am a truck driver today.”

Dedicated driver Jason carries on the legacy of his father and twin uncle’s J.B. Hunt driving careers. The identical twins began working with J.B. Hunt in 1976 and would carry on until 2010. In the early days, they were close friends of Mr. Hunt and Jason remembers growing up around the influence of truck driving, hearing many stories along his father and uncle’s over the road routes. He says the biggest influence his father had on his own driving career was safety and with that, “Always respecting the truck, giving yourself space or an out and realizing you can’t stop on a dime.”

Today, Jason works on a dedicated account in Arizona and says that being professional is one of the greatest influences that he strives to carry on. He says that his regional driving job allows him to have the home time to put his family first – something he finds to be top priority in his own driving career.

From the technical details of learning how to drive stick shift, to broader ideas on safety and professionalism, Mandi, Kevin and Jason’s fathers instilled life-long lessons that continue to be shared with the trucking industry today.

A reminder that today’s truck drivers are carrying much more than the contents of a trailer for the generations of drivers to come!

Interested in learning more about the J.B. Hunt family? Hoping to start your own J.B. Hunt driving career? Call 1-877-791-9458 or fill out our short form and we’ll contact you!