Drivers in our Dedicated Contract Services (DCS) division have the unique opportunity to have a direct impact on their account’s success and Corleone is an example of a driver who has done just that. Based out of Indianapolis, Corleone has only been with J.B. Hunt for around two and a half years, but the impact he’s made on his account and J.B. Hunt has been undeniable.

“There’s not many guys or girls in my fleet that do what he can do in one day,” Regional Operations Manager Josh Kimble says of Corleone’s work ethic. He explains that not only does Corleone strive to be one of the best drivers, but he is dedicated to customer service and is constantly working to make the account better. “He just understands the business,” Josh explains. “Having that kind of a driver in your fleet, it’s like gold.” 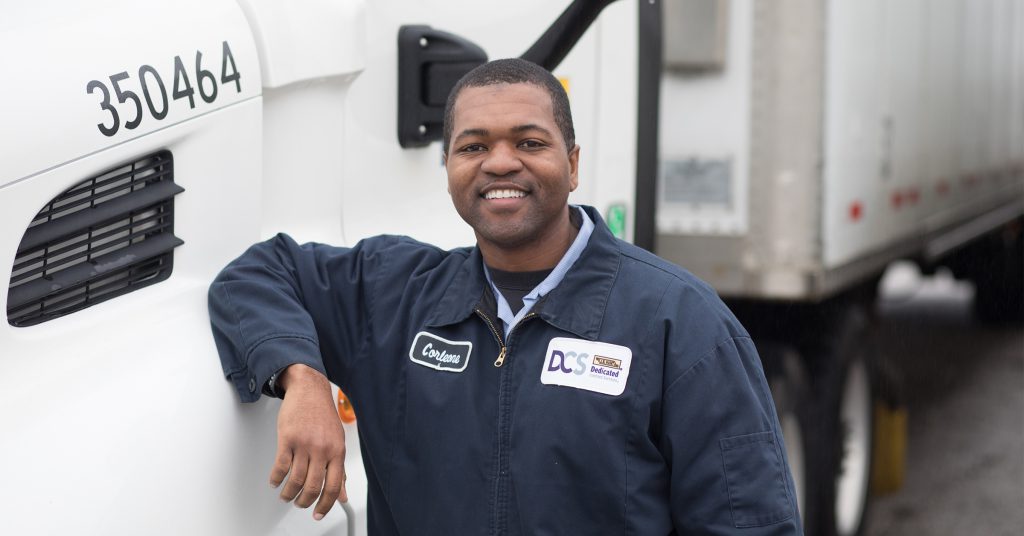 Corleone says his decision to get into the transportation industry was partially inspired by his father, who had been a driver for 25 years, and because it was a financially sound career choice. While training to be a driver, Corleone began asking drivers at truck stops about the companies they drove for, and J.B. Hunt became a recurring theme. “The first guy that I met had been driving for J.B. Hunt in the van division for over 20 years,” says Corleone. He recalls thinking if he had been with the company that long, it must be a good company to drive for.

“One thing that attracted me to [J.B. Hunt] was I’ve seen the potential for job security beyond just having a CDL License,” Corleone says. In addition to the employee satisfaction he heard from the other drivers and the consistent home time, he was interested in the multitude of opportunities J.B. Hunt had to offer. “I noticed that they have intermodal, local, regional, dedicated positions, some over the road positions and other administrative type positions,” Corleone explains. “But for the driving aspect what I was looking for was different categories for how you were able to drive.”

Corleone started on a dedicated account in Indianapolis and quickly made a lasting impression. “I knew we had a star in the making,” Josh says of his initial impression of Corleone. He explains that Corleone learned the account almost immediately and soon began to volunteer to assist other accounts in the region, developing a reputation around the area as an outstanding driver and often being requested by name. “I’ve had to stop and convince other managers that he’s not transferring,” Josh laughed. “He’s mine.”

Only a few months into his career with J.B. Hunt, Corleone was moved to another, smaller dedicated account in Indianapolis. Scott Dorsey, Account Manager, started on the account around the same time. “I’m grateful for Corleone because as a manager I don’t think we would have – I would have – survived,” Scott states. He says on paper he is Corleone’s manager, but in reality they work as a partnership.

“Corleone learns his customers in and out,” Scott says. He explains that Corleone studies the habits of each of his customer locations not only to make deliveries efficiently, but to make each individual happy with his service.

“Because of his dedication, reliability and safety, the customer has give us more responsibility,” Scott says of Corleone. When he and Corleone came onto the account, it was a five-driver fleet, but since then they have gained extra business and their fleet has grown to 10 drivers. “That has a lot to do with Corleone and his professionalism,” Scott explains. “Bringing that business on it’s at least added three drivers to account, just that customer alone.”

“I have always been a hardworking individual, but I never really understood hard work until…I came to J.B. Hunt,” Corleone explains. A former member of the Navy, Corleone has always had a strong work ethic, but seeing first hand the impact he has made on his account has pushed him even harder.

“One thing that motivates me to want to make this account stronger, and I do believe that it will be stronger, is job security,” says Corleone, “I try to remember that we are on a dedicated contract here to this customer, and they are providing us with the opportunity.” He explains that he tries to be helpful in any situation the other drivers on his account may be in, because he knows they all must work together in order for the account to be successful. “With the small amount of experience that I do have,” Corleone says. “I try my best to be that leader.”

Want to learn more about our local and regional dedicated accounts? Call 1-877-791-9458 to speak with a recruiter or fill out pre-qual form and we’ll contact you!