J.B. Hunt is a highly reputable and visible name on thousands of trailers moving America’s freight millions of miles every year. It’s well-known that the ‘J’ in J.B. Hunt stands for the carrier’s founder, Johnnie, but we like to go a mile further and say it represents Johnnie and his wife, Johnelle.

One loyal employee explained the significant role Johnelle played in the success of the business from its beginning, “Mr. Hunt came up with the ideas, some wild and crazy, and Mrs. Hunt always added that little dose of reality and that’s what made it work so well. They were so together with this business that the ‘J’ in J.B. Hunt could actually stand for Johnelle.”

This August, the Fortune 500 company celebrates its 55th year as a transportation industry leader and it all began with a devoted partnership between Johnnie and Johnelle. “He had a drive from the time I met him, lots of dreams, and I guess I cared so much for him. I knew he’d make those dreams come true and he really did,” Johnelle said. 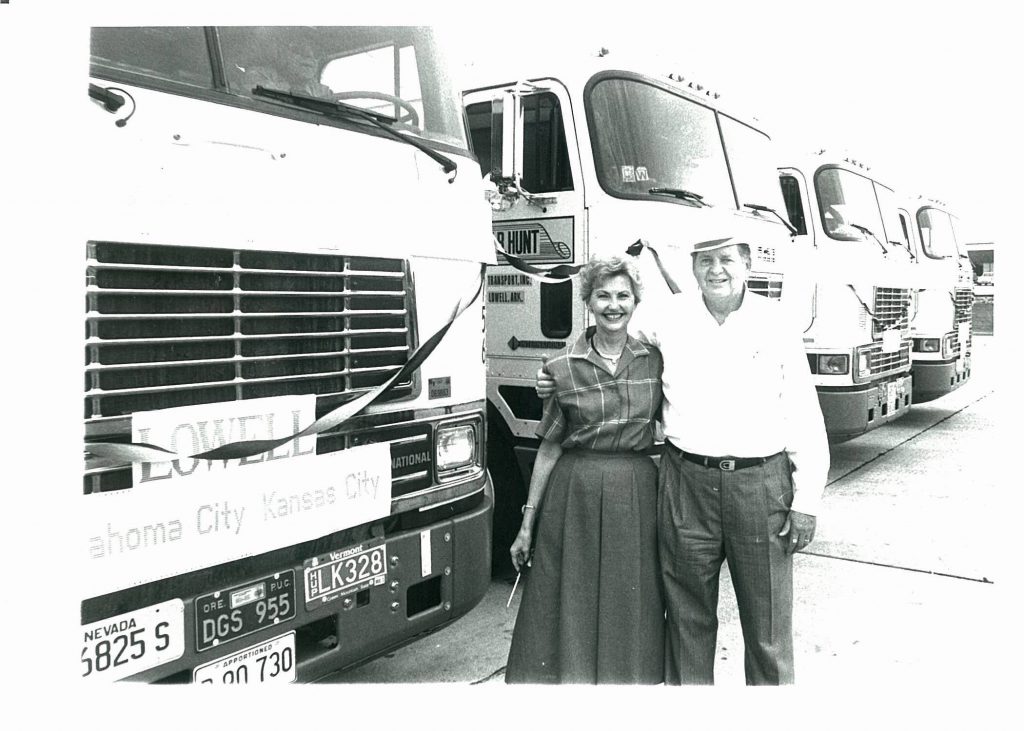 As a young married couple, Mrs. Hunt lived the life of an over-the-road trucker’s wife. “We didn’t know from one day to the next when he would be home. I have experienced what it is to be home alone to raise children alone because he had to be away from home. It’s really not about the time they are away from home, it’s how you use your time when they are home,” she explained.

During his time driving, Johnnie noticed the burning of rice hulls on the side of the road and thought the hulls would make an inexpensive material for poultry house litter. He designed machine spec plans for packaging the material and obtained a patent. J.B. Hunt eventually became the largest rice hull corporation in the country.

J.B. Hunt Transport began as a sideline to the rice hull business, which kept it going for the first two years. The Hunts struggled with the new trucking company.

“It was before deregulation and it was a challenge. It was not easy. I would stay awake at night and try to figure out how to get money from someone, calling at five o’clock in the morning and hanging up on me and me calling back three times, you know. Get their home phone number and call them at home at night. I had no limits in what I would try to collect the money because it was that desperate,” Johnelle said.

One employee remembered Johnelle telling him, “Don’t ever be ashamed to ask somebody to pay us. We did the work.”

With Johnelle’s persistence and strong work ethic, along with a new innovative and creative team, J.B. Hunt Transport shifted gears and made some economical changes. They standardized fleet with fuel efficient and smaller engines, improved fuel mileage, fleet efficiency, and utilization, and gave drivers uniforms.

With the enactment of deregulation, carriers were able to expand their customer locations and services, as well as offer competitive pricing. J.B. Hunt excelled in this new environment. The company eventually went public and grew into the industry leader it is today.

There’s no arguing that Johnelle’s perseverance and hard work played a significant role in J.B. Hunt Transport’s 55 years of progress and success. Every day, our J.B. Hunt family strives to make her proud.

Ready to join our family? Learn more about our driving careers by calling 1-877-791-9458 or visiting our website.